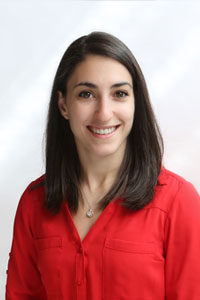 Hi, I’m Houry and I was the first female gymnast to represent the Republic of Armenia at the Olympic Games. I’ve been involved in gymnastics f or 20 years. As a child, I won multiple State Championships, was a Level 10 National competitor, and earned a full scholarship to the University of Iowa. While at UI, I competed all four years in the All-Around, attained the honor of 2010 Big Ten Champion on balance beam, and competed at the 2011 NCAA National Championships.

Post-graduation, I continued on to International Elite competition, competing for the Republic of Armenia at the 2011 World Championships. Here, I secured a spot as a reserve athlete for the 2012 Olympic Games. Unable to qualify in 2012 and after taking a 3 year hiatus to pursue a career as a Physician Assistant, I returned to International competition to continue toward my dream of the Olympics.

In the summer of 2016, I made this dream a reality by qualifying to ad competing in the 2016 Rio Olympic Games where I also pioneered a new gymnastics element on the uneven bars, The Gebeshian. To make this experience even more meaningful, I was able to have Nicole choreograph my bb and fx and Darek custom cut my music for the Olympic Games!

While competing in NCAA, I earned my Bachelor of Science degree in Athletic Training and became a Board Certified Athletic Trainer. I then continued my education at Wake Forest University, earning a Master of Medical Science degree in Physician Assistant Studies. I currently work at the Cleveland Clinic as a surgical Physician Assistant on the Labor and Delivery floor.

Upon the completion of my athletic career, I plan to continue to inspire through community leadership and motivational speaking. I also hope to continue building an Armenian Women’s gymnastics program for the next generation to follow in my footsteps.

I am excited to join Precision Choreography because as a little girl doing gymnastics, I looked to Nicole as a role model. Now, I have the opportunity and honor to work alongside my role model and the rest of the amazing Precision team!